← Popularity of Gaming
Modify your Games! →

Today is the greatest day of the summer for V1. As I described on Monday, living with my roommate for the past 3 months was almost hell.  Today he left for home for good and I couldn’t be any happier.

Above is a picture of “Mike” who is sleeping on the ground as he is sick of sleeping on my couch.  As part of good will, I had let him borrow my extra pillow these last two weeks.

Now here is the funniest part of this whole summer ordeal.  Mike has started his internship without the employer knowing that he got kicked out of school this last semester.  Within the last weekor two, Mike got in touch with school and filed a petition letter, stating that the reason for his poor grades last semester was due to “threats from his roommate” who had written on the back of an envelope “Die Mike” in Chinese.

During that semester, Mike was afraid and he couldn’t focus. Plus, he was able to get from his doctor a notice stating that he had ADD.  With this evidence, and beyond my own personal belief, we just learnt yesterday that the school is giving him a chance to come back this fall.

I had suffered this whole summer because Mike had believed he was not going to get back into school until next year some time, and now he is the happiest guy I know.  Well, actually I’m happier now that I don’t have to listen to his troubles anymore.

As a lasting farewell, I’m putting up this picture of him so that the rest of the world can feel my pain living with Mike. 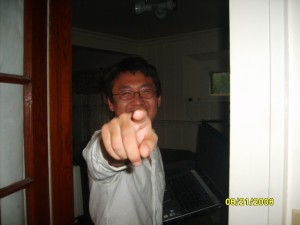 ← Popularity of Gaming
Modify your Games! →