How Does It Feel To Be Cloned, Or Copied? Well, It Sucks!

Added new Youtube Video to help put a nail in the coffin. If you are VersatileTaco (and team), you do not want to skip this video. You will enjoy it, guaranteed. – Versatile

It turns out that VersatileTaco is alive. He rejected my Tunngle friend request!

Revisions:
2-6-10: Initial release. I am still in disbelief. Expect more to follow.
2-7-10: The Underground has won. Thanks to all. The clone blog and youtube accounts have been deleted. Power comes in numbers.

I am so pissed today that words cannot express clearly enough how I feel.  Zax from Tunngle sent me a PM today telling me to check out this Versatile “clone” he found on the Internet.  I took a look around, and I am still in utter disbelief.  If you got http://versatile32.wordpress.com/, you will notice that the website is very similar to ours!!!! In fact, the way he did the format and everything is an exact clone of The Underground.

Below is a screen capture of it so you can see it before they change the format:

“How Far Down The Rabbit Hole” tag line is an invention of ours, as an ode to the matrix.  Unbelievable.

Some of their videos he watched mine, and just re-did it his own way, such as how to rip and burn a PS2 game using DVD Decrypter. What is hilarious is that when I watched the video, it is clearly evident that the new “Versatile” is not an expert of his own domain.  He probably watched my videos over and over to repeat what I said, but not word for word but close enough to it. The intro music is the same as GameDexterity, and did I mention that he says the EXACT same thing as I do when I close off any Youtube video!

Even in their Youtube channel, they copied the same format and even text description! Look at the below screenshots, first GameDexterity (my channel), and then Asphaltclips. 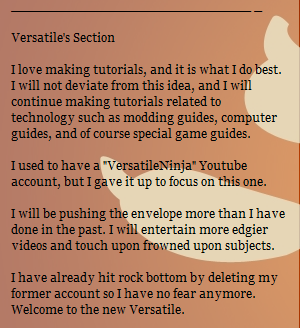 The Pissed Versatile Message to the Clone:

Below is a screenshot of the message that I sent to the clone. I am very interested to see how they will respond, because I know for a fact they know they are ripping us off.

(Click on the pictures to see it full screen and all the text please.)

How Do We Fight This?

This is where I am asking for your guys feedback. For the future, and maybe for older articles I will revisit the images and watermark them. For new youtube videos, I haven’t decided what to do, but there has to be a way to me to prove to the viewers that the video is real, and authentic, and most importantly me, and not a clone.  Yes, there is a GameDexterity watermark, but I have an idea of what I can do in future videos to give it that special “Versatile Touch” that a clone cannot emulate. I cannot reveal it here, as I know the clone reads us and may steal my idea.

Please leave a comment if this copycat has touched your heart, because it definitely has touched mine.