Do you own a Sony game device? Maybe its a PS1, PS2, or a PSP. Did you know that all Sony game products are jail-breakable or moddable? I am a proud owner of several Sony devices, and I have taken great joy in jailbreaking them to do things that the consumer was not able to do in the first place. The greatest feat of it all is being able to make backups of my games so then I can preserve the original copies.

However, we know that the Playstation scene is a constantly moving force. It is can be tough sometimes to find good and legit news that isn’t faked, or maybe you want to know about the latest homebrew programs or hacks for your favorite Sony device. Where do you get started?
END_OF_DOCUMENT_TOKEN_TO_BE_REPLACED

I’ve been so horrible at keeping up with my “Weekly Wrapup” of tech news.  I guess I could come up with a long excuse about my dog eating my keyboard or something, but I won’t waste my time.  I don’t have a dog anyway.  Now to the news.

Sprint has announced the HTC Evo 3D, the second 3D smartphone in the US.  I personally think 3D is just a gimmick to get people to buy, but this thing comes with some other goo-looking specs as well.

END_OF_DOCUMENT_TOKEN_TO_BE_REPLACED

MySpace Is For Sale

Big news:  MySpace still exists.  No, I’m not kidding.  And they’re for sale.

Parent company News Corp. has admitted that they are considering selling MySpace, just a day after announcing massive layoffs affecting nearly 50% of their staff.  “News Corp. is assessing a number of possibilities including a sale, a merger and a spinout,” spokesperson Rosabel Tao told Bloomberg.  News Corp. bought MySpace in 2005 for $580 million, but the site has been declining dramatically and it has proven unsustainable.  It was one of the first large social networking sites, but it was quickly overtaken by Facebook.  MySpace recently tried to make a comeback by redesigning the site and calling themselves “the leading social entertainment destination powered by the passion of fans.”  MySpace was originally cool because it gave musicians a place to hang out virtually and share music.  The redesign is probably an attempt to recapture that initial appeal.  But their 65 million users simply fail to compare to Facebook’s 600 million users.  If News Corp. wants to sell, they need to sell now. 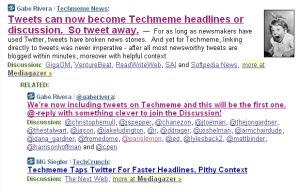 Tech news aggregator Techmeme has announced that tweets can now become headlines or discussion posts on the site.  This is yet another indicator that Twitter is becoming a mainstream source of news and information, which is a big step forward for Twitter as a company.  But could it also be an indicator that blogging is dead?

I sure hope not.  But a blog aggregator full of arbitrary tweets sounds like a recipe for disaster in the blogging community.

Techmeme says tweets are not taking over the site; they are going to be tactfully blended with the other types of headlines:

Since 2007 I’ve been asked about 200 times about whether we would introduce a “Techmeme for tweets,” i.e. a Techmeme made up of just tweets. My answer for this has always remained “no”. Any news site aiming for a certain level of comprehensiveness can’t limit itself in such an arbitrary way. Most of the time, the best headline for a story, and the best link for a story is, well, a story, not 140 characters. But omitting tweets from Techmeme wasn’t the best approach either. We believe a mix of blog posts, articles, and a smattering of tweets (plus other new forms of content), is the best way to distill what’s happening right now in technology. We hope you’ll agree, enjoying Techmeme all the more, and will maybe even contribute something to Techmeme now that it requires only 140 characters.

MySpace has finally rolled out the long-awaited redesign of their website.  Is it good?  Kinda.  Great?  No.  Better?  Definitely.  I did a long piece on United Tech Guys about the positives and negatives, but to sum it up, the negatives outweigh the positives.

MySpace is dropping the “a place for friends” tagline in order to become “the leading entertainment destination that is socially powered by the passions of fans and curators.”  This is an attempt to redefine what MySpace is as a whole, so as not to be the loser in the battle against companies like Facebook and Twitter.  The new design is cleaner and more organized, without a doubt.

The negatives include the backlash on Twitter, the busy and disorganized homepage, the head-start that Facebook has (with 500 million users, compared to MySpace’s 61 million), and quite a bit more.  Also, have you seen the MySpace Logo Video?  Bizarre.  Very bizarre.   END_OF_DOCUMENT_TOKEN_TO_BE_REPLACED

We’ve been hearing rumors for a while now about Facebook’s secret “Project Titan,” a fully featured webmail client that we hear is unofficially referred to internally as its “Gmail killer.”  Now we’re hearing that it will be officially unveiled at the event Facebook is holding on Monday.  It is expected that users will be able to acquire their own @facebook.com email addresses.

Facebook has the most popular photos product, the most popular events product, and soon a very popular deals product.  They could easily integrate these (and other Facebook services) seamlessly into their inbox project.  Facebook could also kill Gmail’s new priority feature because they can easily track who you interact with and prioritize emails accordingly.

END_OF_DOCUMENT_TOKEN_TO_BE_REPLACED

Guide for Better and Safer Torrenting

[This is guide is designed for everyone out there who wants to know the tips and tricks for better and safer d0wnloading.I will be going into full detail as to what a torrent is, to who are the best uploaders out there right now,and finally what torrent clients and media players are the best to use.]

So let’s get started. First off there have been many questions about who are the best uploaders of torrents out there. Well,  there are many great uploaders such as Axxo, FXG, and Kingben666 but with their success comes problems. I’ll explain a little later on, but first I wanna go into full detail about this so everyone will get their movies,music and games safely (and better yet), for free.  END_OF_DOCUMENT_TOKEN_TO_BE_REPLACED